Carol Stein is moving and bringing her own unique brand of Disney magic to a new location!

While there are the big nighttime spectaculars like Disney Enchantment at Magic Kingdom’s Cinderella Castle, Harmonious at EPCOT’s World Showcase Lagoon, and (currently suspended) Fantasmic! at Disney’s Hollywood Studios’ Hollywood Hills Amphitheater, other offerings are dotted around the Disney Resort. 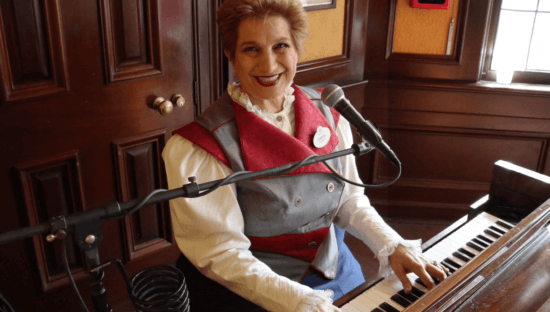 In an emotional Facebook post, Stein announced the move from the United Kingdom pavilion’s gazebo area to the American Adventure Rotunda. She said:

My last set at the UK pavilion and EPCOT was a bit more emotional than I anticipated.  tears of joy and tears of sadness at the same time. It is said that “Spring is a time of growth, renewal and a time to embark on new endeavors!”
With excitement (and apprehension that comes with change) I am looking forward to opening the new musical presentation at the American Adventure Rotunda in EPCOT this Sunday, April 10, at 11:30 AM!! I am so grateful for this opportunity.

Guests wanting to see Stein perform on her piano at the American Adventure Rotunda should note that the musician will not be at the pavilion on selected dates, as seen on her official website. This month, the long-standing Walt Disney Community Cast Member will not be playing the piano from April 21 through April 26, returning to the rotunda on April 27.

Take your seat in a stately Colonial theater and meet Benjamin Franklin and Mark Twain—your guides on this trip through time.

Witness landmark events like landing of the Mayflower, the Boston Tea Party, the winter at Valley Forge, the penning of the Declaration of Independence, the Civil War and the Great Depression.

You’ll even encounter luminaries like Susan B. Anthony, Frederick Douglass, Thomas Jefferson, Chief Joseph and Teddy Roosevelt, among others.

Will you hope to see Carol Stein at EPCOT’s American Adventure Pavilion? Let us know in the comments down below!

The post New Entertainment Coming to EPCOT’s American Adventure THIS Weekend appeared first on Inside the Magic.

Disney Is a ”Nightmare to Work For,” Long-Time Cast Members Say

Disney Is a ”Nightmare to Work For,” Long-Time Cast Members Say