In a new report, Disney is now claiming Captain Hook and Tinker Bell are “potentially problematic” characters. Shortly after the report was released, fans quickly voiced their opinions on social media.

In case you weren’t aware, Peter Pan (1953) has been accused of being “outdated” and “depicting the mistreatment of people and cultures” in certain scenes, which also appear in the Disney Parks attraction, Peter Pan’s Flight.

Due to these scenes in question, Peter Pan is one of the various films that has recently been removed from children’s profiles on Disney+ for “breaching content advisories”. As for adult profiles, Peter Pan remains available but it does display a content warning before the movie plays.

Additionally, last year, we reported that Peter Pan’s Flight was quickly becoming a “hot topic” in regard to Disney Park attraction rethemes. Thanks to a Tweet from DLP Report, it was pointed out that Disneyland Paris recently digitally removed the one scene of the ride, which features Tiger Lily and the Indian Village, from their “Ride and Learn: Peter Pan” video. It is important to note that DLP Report states that the attraction will not see any actual changes when the Resort does reopen.

After this video emerged, fans were quick to voice their opinions surrounding the classic Disney Parks attraction.

This topic soon resurfaced earlier this year after the offensive chant from The Port Neches-Groves Independent School District.

The Port Neches-Groves Independent School District represented themselves at Magic Kingdom a few weeks ago, who, in their Native American-inspired uniforms, marched down Main Street, U.S.A. as they sang, chanted, and danced in front of Disney Guests.

However, the chant caught the attention of many as the drill team repeatedly shouted, “I-N-D-I-A-N-S, scalp ’em, Indians, scalp ’em!” while dancing. 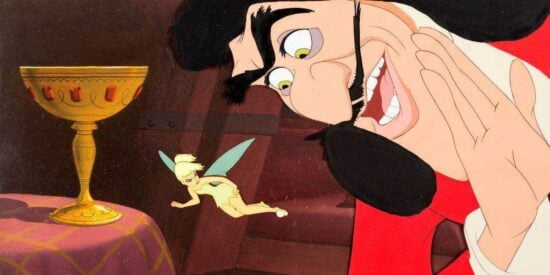 Now, Peter Pan is once again the topic of discussion as according a new report from The New York Times, Disney has released a statement saying Captain Hook and Tinker Bell are “potentially problematic” characters.

Per the report, when discussing Tinker Bell and Captain Hook, the Stories Matters Team said:

Tinker Bell was marked for caution because she is “body conscious” and jealous of Peter Pan’s attention, according to the executives, while Captain Hook could expose Disney to accusations of discrimination or prejudice against individuals with disabilities because he is a villain.

At least some people inside Disney are concerned that such sensitivities go too far. One of the executives worried that looking at artistic creations through a “politically correct filter” could chill creativity.

Now, fans are speaking out about this new report, and they are not holding back their thoughts and opinions.

Inside the Magic fan Michelle said:

I do not even care about going to Disney anymore and I always loved it. They are getting ridiculous and bowing down to the few woke people who look for anything to complain about. Stand up Disney and say enough is enough or you will find no one going to your parks.

And another Inside the Magic reader, Susan, commented on our article, writing:

People just a get upset at the littlest things nowadays. I was taught if you don’t like it don’t watch it to eat it. These woke people need to lay off and go back to Disney needs to quit pleasing one little group of people and making the rest of the people upset.

Kevin, another Inside the Magic fan, expressed his opinion, writing:

I love how of all the Disney villains they’re going after, they pick the one with the “disability” XD. He tries to murder children, literally sends Peter Pan a bomb, and they go after him because he doesn’t have a left hand. Almost seems like Disney is discriminating against him.

And Tink likes her figure, so they go after her for that? Attempting to have Wendy murdered and leading the pirates to Peter’s hideout is okay by them. She confident, self reliant, and they get body conscious from that?

And Thomas did not hold back as he said:

If anything we need MORE villains in the classic style, we need genuine antagonists in Disney movies, that’s the one thing that movies like ‘Encanto’ have been missing, we all knew Bruno would be a nice guy actually (Spoiler if you haven’t seen it). Captain Hook is from a story over 100 years old, and for which the royalties go to Great Ormond Street Hospital to help treat severely sick children…can we focus on that rather than worrying someone might be offended by an evil pirate with one hand? And Tinkerbell…the Disney version was created at a time when Marilyn Monroe, Mae West and all the other classic Hollywood actresses were at their height because they embraced their bodies and sexuality. I could literally name ANY Disney character from Mickey Mouse right up to the Mirabel in Encanto (I haven’t seen Turning Red yet) and find something offensive about every single one. Kids aren’t daft, they know who’s a bad guy, who’s a good guy, and the difference between someone they see in a movie and what they see in real life…it’s adults who press these woke ideas and funnily, it’s adults that should grow up […]

What do you think? Are Tinker Bell and Captain Hook  “potentially problematic” in your eyes? Let us know in the comments below.

The post Fans “Tired of Woke Disney” After Disney Deems Captain Hook, Tink “Problematic” appeared first on Inside the Magic.

What Will ‘Ghostbusters 4’ Be About?