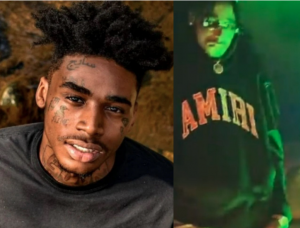 DC rap mainstay Goonew was shot and killed a few weeks ago, but over the weekend, the 24-year-old late rapper’s body was propped up on stage at a DC nightclub for a memorial service, much to the disgust of some critics and attendees.

Complete with an iced-out watch, hoodie, and crow, Goonew’s embalmed body was on display at Bliss Nightclub, with many calling the viewing disrespectful, while others say that this is the way Goonew, whose real name is Markelle Marrow, wanted to go out.

The nightclub apologized, saying they knew about the memorial service but had no idea that an actual corpse would be on the stage.

The post [WATCH] Slain DC Rapper Goonew’s Body Propped Up On Stage For Nightclub Funeral appeared first on The Source.